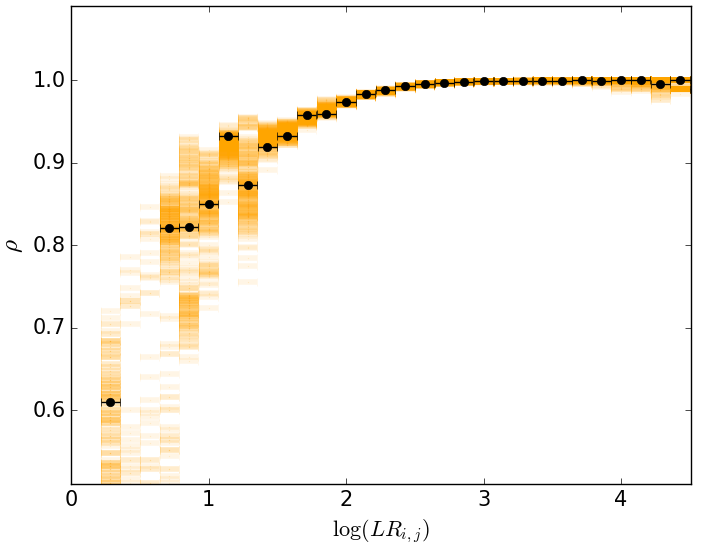 Paper: On the physical association of Fermi-LAT blazars with their low-energy counterparts

Associating γ-ray sources to their low-energy counterparts is one of the major challenges of modern γ-ray astronomy. In the context of the Fourth Fermi Large Area Telescope Source Catalog (4FGL), the associations rely mainly on parameters as apparent magnitude, integrated flux, and angular separation between the γ-ray source and its low-energy candidate counterpart. In this work we propose a new use of likelihood ratio (LR) and a complementary random forest (RF) technique to associate γ-ray blazars in 4FGL, based only on spectral parameters as γ-ray photon index, mid-infrared colors and radio-loudness.

We modified the LR method used in 4FGL to estimate the association probability ρ of a counterpart for a given γ-ray  source. For each 4FGL source, we considered the γ-ray photon index interval ΔΓ= [Γ -σ, Γ + σ], where σ is the uncertainty on the photon index as listed in 4FGL. Then, given the known correlations between  Γ, the mid-infrared (MIR) colors c, and the MIR radio-loudness q for γ-ray blazars, we selected only those sources with parameters lying within the ΔΓ intervals, as in the figure below:

For each MIR counterpart i of a γ-ray blazar source j we computed the LR and then the association probability ρ as a function of the LR, as shown in the figure below.

The RF is an ensemble classifier that uses decision trees as building blocks for classification. For classifying a new object, each tree in the forest chooses one class and, by aggregating the predictions of all decision trees, the RF makes a final prediction based on the choice made by the majority of the trees, thus improving the predictive capability and reducing the tendency of standard decision trees to overfit the training sample.

We trained the RF method with basically the same atributes used in the LR approach obtaining a modest final accuracy of ~80%. As this accuracy is not very high, we opted by using the RF approach as a complementary method to the LR.

Compared with 4FGL, the association probabilities found by our methods tend to be higher than those listed in 4FGL (see figure below). 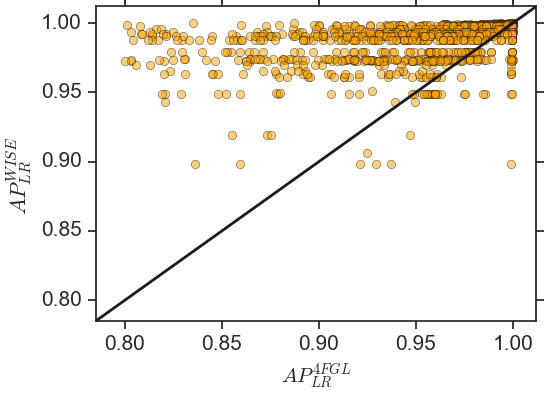 In this work we were able to associate ~1000 blazars with both LR and RF methods, where ~300 of them are good targets for future optical spectroscopic campaigns. This was also the first work where spectral properties of blazars were used to associate γ-ray sources to their low-energy counterparts. Previous methods rely basically on parameters like apparent magnitude and angular separation between the γ-ray source center and the position of its candidate counterpart.

The original discussion of this work can be found in de Menezes et al. (2020).

View all posts by Raniere Menezes