The majority of the activity around nearby (z ~ 0) supermassive black holes (SMBHs) is found in low-luminosity active galactic nuclei (LLAGN), the most of them being classified as low ionization nuclear emission regions (LINERs). Although these sources are well studied from radio up to X-rays, they are poorly understood in gamma-rays. In this work we take advantage of the all sky-surveying capabilities of the Large Area Telescope on board Fermi Gamma ray Space Telescope to study the whole Palomar sample of LLAGN in gamma-rays.

Gamma-rays from the accretion flow

The observational properties of LLAGN favor a scenario for their central engines which is quite different from that of more luminous AGN: since the SMBHs are accreting at low rates they are in the radiatively inefficient accretion flow (RIAF) mode (Narayan & Yi 1994) rather than radiatively efficient geometrically thin accretion disks (Shakura & Sunyaev 1973).  RIAFs store most of the viscous energy and advect it into the SMBH. The viscous heating affects mainly the ions, while the radiation is produced primarily by the electrons.

The presence of both RIAFs and jets in LLAGN produces a rich multiwavelength spectral energy distribution (SED) in which a gamma-ray component should be expected. There are multiple possible origins for the gamma-ray emission. In the vicinity of the event horizon, the ion temperature of a RIAF can reach 10¹² K (Yuan & Narayan 2014), thus enabling proton-proton collisions and the production of neutral pions, which subsequently decay into pairs of GeV photons (Mahadevan et al. 1997). Furthermore, synchrotron self-Compton (SSC) emission is expected from the jet. Quantifying and modeling the gamma-ray emission from LLAGN is the main goal of this work.

Precisely, the four radio-brightest LLAGN in the sample are identified as significant gamma-ray emitters, all of which are recognized as powerful Fanaroff-Riley I galaxies. These results suggest that the presence of powerful radio jets is of substantial importance for observing a significant gamma-ray counterpart even if these jets are misaligned with respect to the line of sight (see figure below, left panel). We also find that most of the X-ray-brightest LLAGN do not have a significant gamma-ray and strong radio emission, suggesting that the X-rays come mainly from the accretion flow in these cases (see figure below, right panel). 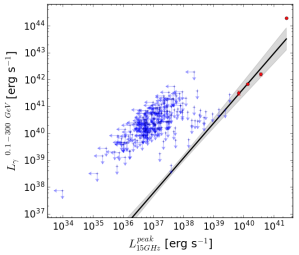 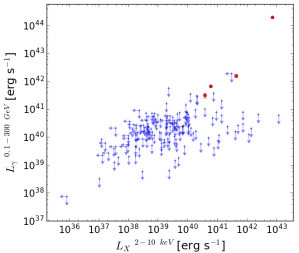 When comparing different emission models to the SEDs of these gamma-ray-bright LLAGN, we find that they are well described by a jet-dominated model in the form of a one-zone synchrotron-SSC jet scenario, similar to what is expected when observing blazars (see figure below, left panel). We also find that models invoking the origin of the electromagnetic radiation in a RIAF fail to explain the observed gamma-ray emission but are able to reproduce the radio-to-X-ray emission (see figure below, right panel). Since the gamma-ray-bright LLAGN consist of powerful radio galaxies, it is not entirely unexpected that their emission can be dominated by a jet even if misaligned to the observer’s line of sight.

The original discussion of this work can be found in de Menezes et al. (2020).

View all posts by Raniere Menezes