Our paper, “VLT/SINFONI study of black hole growth in high redshift radio-loud quasars from the CARLA survey”, has been accepted for publication in the Monthly Notices of the Royal Astronomical Society, and the pre-print appeared on astro-ph today. The paper was led by former graduate student Murilo Marinello, and this work formed a major part of his PhD dissertation published in April this year.

The new study focused on 35 distant, radio-loud quasars, the majority of which were selected from the Clusters Around Radio-Loud AGN (CARLA) survey. These quasars were known to have large black hole masses, emit luminous radio emission, and tend to be found in dense regions of the early universe. Therefore, they are believed to be good candidates for the distant progenitors of massive (elliptical) galaxies that dominate the universe today. The masses of their supermassive black holes had previously been estimated using the virial black hole mass method applied to their SDSS spectra. Due to their high redshifts, however, the only emission line available to make these measurements in these optical SDSS spectra was the CIV line. This line is known to be affected by non-gravitational effects (winds or outflows) and is thus not optimal for the virial black hole mass estimate. In this project, we therefore re-observed the quasars in the near-infrared using the SINFONI spectrograph on the Very Large Telescope in Chile. This allowed us to access the redshifted Ha broad emission line, and thus determine the black hole masses more accurately. This makes a big difference, as can be seen in the figure below showing the nice symmetric Ha line on the top and the distorted CIV line at the bottom for one of our quasars:

Together with a determination of the accretion rates of the quasars, which can be estimated from their luminosities, the new black hole masses were used to also derive the growth histories of these supermassive black holes. One major finding was that if these quasars had always been accreting at the same rates as measured at the current time, it would not have been possible for them to obtain their high observed masses within the cosmic time available since the Big Bang. The logical conclusion is thus that these quasars must have experienced a phase of much faster growth in the past. This can be nicely illustrated in the following figure: 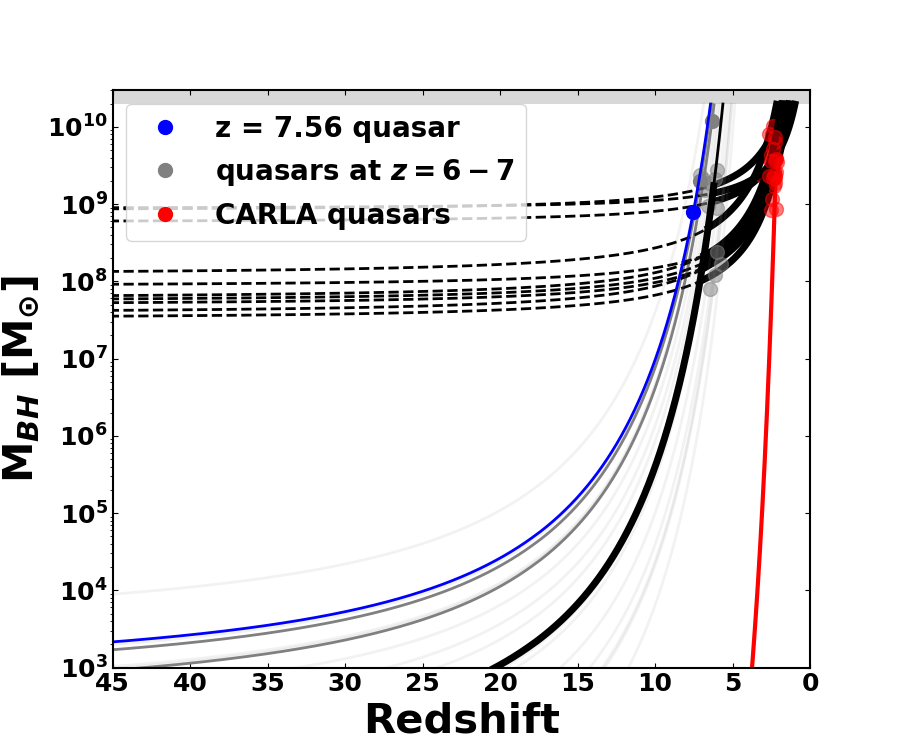 The red points are the CARLA quasars from this study. The black solid lines show the growth tracks we found to be the ones describing their most likely histories. These tracks consist of two phases: a rapid growth phase starting from a one thousand solar mass black hole seed at z ~ 20, growing at the Eddington limit to a hundred million or more solar masses at z ~ 6, followed by a second, slower phase at the observed lower Eddington ratios until z ~ 2-3. As such, it is possible that the CARLA quasars are direct descendants of the luminous quasars found at z ~ 6-7.

In the local universe, there is a strong correlation between the masses of the supermassive black holes and the masses of their host galaxies. Since the more massive galaxies are also found, on average, in more massive dark matter halos, there is an indirect connection between the mass of the black hole and the mass of its halo. We therefore also tested whether the black holes in the CARLA quasars already “know” that they are located in dense galaxy environments:

We found a weak, low significance correlation between the black hole masses and the surface density of galaxies that surround them (the latter is a measure of the environment or halo mass of the CARLA quasars), and therefore do not find strong evidence that the most massive CARLA quasars are also in the most dense environments or massive halos. However, these galaxy surface densities had been previously determined with the Spitzer Space Telescope as part of the CARLA project, and are not very precise. In the future, we will therefore focus on trying to obtain more precise measurements of the environments of the CARLA quasars, and test again for possible correlations between black hole mass and environment.

View all posts by roderikoverzier